The outlet complex is located on the slopes of Mount Soratte and covers an area of about 100,000mq including parking and external roads. The surface on which the built nucleus and the internal pedestrian paths – the object of survey – stand on is about 55,000 sq.m, under this nucleus there are covered parking lots. The outlet of Soratte has an irregular shape, it is composed of three distinct zones or nuclei (A, B and C) each composed of different buildings.
The purpose of the survey was to generate a BIM model for the future design of the restyling of the whole complex. All the facades, roofs, the underlying parking level and all the paths inside the complex were therefore measured and rendered. The architectural survey in addition to the geometry of the facades also detected the material of the different finishes.
The instrumentation used was a Leica laser scanner model “P30” which has a maximum scanning distance of 120m and a maximum resolution of 0.8mm@10m
. The laser scanner is a high precision direct measurement instrument for the three-dimensional detection of objects. The instrument is able to measure hundreds of thousands of points with a very high speed (1 million points per second) to define the surface of the object detected. The result obtained is a very dense set of spatial coordinates that form the so-called “point cloud” obtained in this case by performing 128 stations in situ. 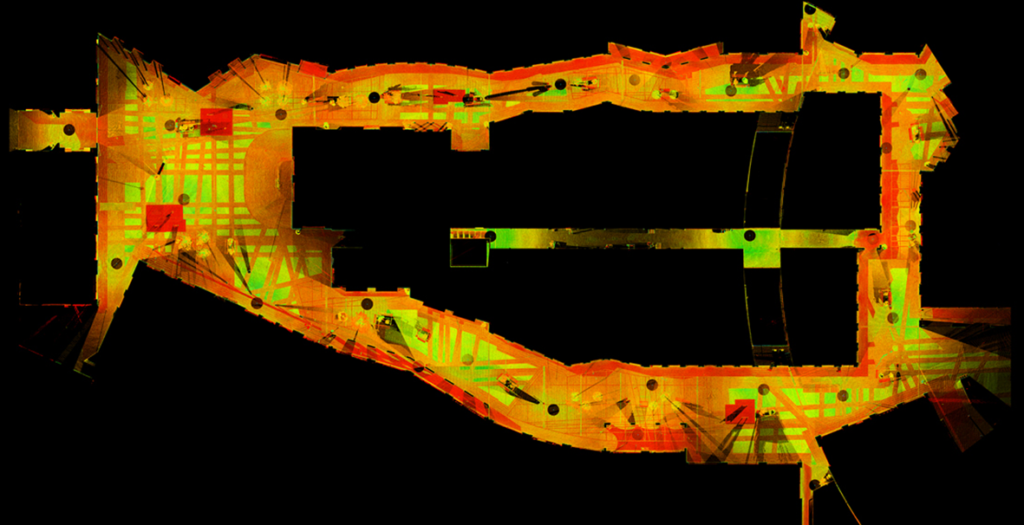